Posted on October 15, 2012 by brochskateclub

Due to unforseen circumstances the quiz night has been posponed.

Members meeting Thursday 10th may @7pm at the youthie

Hope to see you all there

Hope to see you all there

Posted on March 6, 2012 by brochskateclub

We are having our 1st AGM (Annual General Meeting) on 22nd March 2012 at 7pm in the Broch Community Centre.

All Broch Skate-club Members and the general public are invited to attend.

This meeting will be open for any discussions you may wish to have, and also for you to vote for the re-election of Office Bearers.

As you may be aware the current committee members and officials will stand down at the AGM, and your vote decides who will be elected for that part.

It is vitally important to the Skate-club that you attend and have your say in the election of the committee and Office Bearers.

Look forward to seeing you there.

Posted on February 6, 2012 by brochskateclub

Just a quick mesage to let everyone know the next members meeting will be held on Thursday the 16th February at 7PM in the youth center.

hope to see you all there!

Posted on January 9, 2012 by brochskateclub

Finally we have got together to do the long overdue write up of the BBQ Fun Day we held back in October!

The day got off to a good start with the sun making an appearance and the park being dry all cleaned up by the locals for the days event, thanks to all that helped clean up the park.

We received the generator from MB Plant at a discount rate (cheers MB Plant!) only to find we couldn’t get it started. However, MB Plant staff came to our rescue, panic over!

While we were stressing out over the generator the rest of the crew had been busy setting up the BBQ which was kindly donated by the good folks at Fraserburgh Lifeboat, cheers folks! With the BBQ now setup, Susan and Brenda started sizzling up the burgers and sausages that they kindly donated along with a big thanks to Angela’s Tea Bar who also donated food for all. 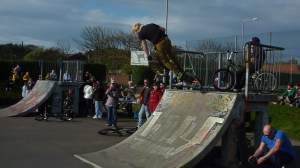 While the BBQ was smoking Matthew Noble was busy setting up the PA system and provided a good choice of music, the day would not have been the same without it!

ig thanks to Matthew Noble (Moley) and In The Mix for providing the music throughout the entire day. The music created a good atmosphere and everyone was buzzing around the park practicing their tricks for the upcoming competitions.

First up was the Bladers with Alexander Stephen, Ethan Maitland, Adam Gibson and Mark Morrison all set to do battle.

Next up we had the BMX groms (under 14s), Andrew Stephen, Declan Taylor, Declan McDonald, Bruce Buchan and Reece Taylor. 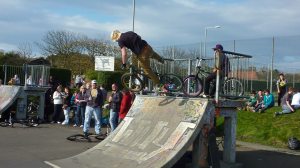 Then we went dove straight into the under 14 skateboarders, Brandon Bain, Logan Reid, Izaac Morrison, Ruben Morrison and Liam Hewitt.

There was a good turn out for all categories of under 14’s, with a greater number onlooking, maybe they will take part next time, who knows?

Liam Ogg, Peter Foxe and Robert Wilson (Jib) all competed for the crown of best BMXer in the Broch.

Jib grabbing his front wheel as he airs over the funbox, the BMXers put on a great show for the crowd with big crowd pleasers from Liam Ogg with his 540 and tuck no hander, Peter Foxe with tricks like his double peg stall to fakie.

Last but not least, the skateboard final, with Damien Martin, Matthew Stewart, Joe Paterson and Robert Milne (AKA Rab) all competing to be king.

Rab stylee backside smith. With the standard set high on a sub standard park the skaters were really laying down some hard tricks. To name a few Damien’s 360 air over the box, a big crowd pleaser , local ripper Joe Paterson bust out an array of tricks consistently, including his late finger flip over the box while Matthew cruised around the park with style.

And the winners are…… 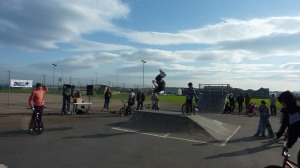 A big thanks to Ali Davidson for putting on a good show and for helping to judge the Rollerblade competition. 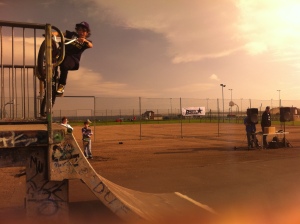 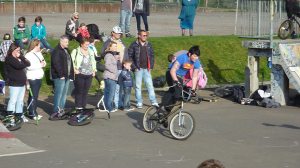 Peter Foxe focusing and setting up for his next trick. 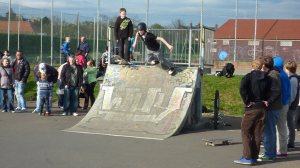 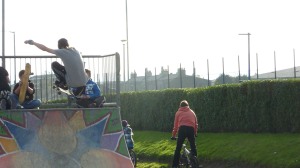 Joe Paterson flying high over his own artwork.

We would like to thank Scotmid for donating vouchers, Lidl for donating money, Tesco for donating a voucher, Monster Energy drink for donating tins of juice and the Broch Surf Club for donating prizes courtesy of O’Neil. Through everyones efforts and contributions we have managed to raise around £500 towards upgrades to the skatepark. 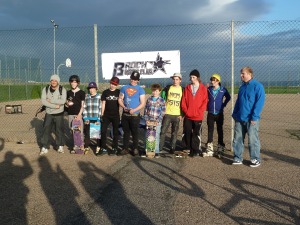 We would like to thank everyone that turned up and made the day special. We thoroughly enjoyed organising and putting on the event, we hope you enjoyed it as much as we did.

If any one has pics they would like to  see in the gallery section of the web site can you send them to Info@brochskateclub.com
Thanks, we hope to see you all again at future fundraisers

Posted on November 13, 2011 by brochskateclub

Posted on October 13, 2011 by brochskateclub

Members meeting tonight at the youth center at 7pm

Posted on September 29, 2011 by brochskateclub